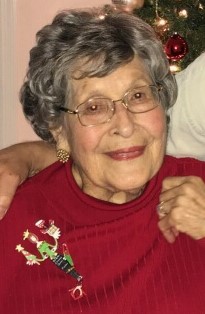 Margaret Poole Heath, age 96, of Florence, passed from this earthly life on May 7, 2019.  She was born on February 18, 1923, and raised in Florence.  Preceding her in death were her parents, Thomas and Annie Keller Poole; husbands, Jimmie L. Heath, Leo E. Morgan, and the father of her children, James G. Thornton; and brothers, Ralph C. Poole and Thomas C. Poole

Margaret was an active member of Grace Episcopal Church.  She enjoyed being with her family and friends.  Special to her were her Fridays spent with her only sister, Elizabeth, her Monday morning reunion group, and the birthday group friends.

She worked for TVA as a secretary until retirement and enjoyed being a member of Cliff Haven Garden Club, having served as President and in other capacities.  During World War II, Margaret volunteered her spare time working at ECM Hospital as a Red Cross Nurses’ Aide.  She did volunteer work with the Red Cross bloodmobiles, Girl Scouts and the Office of Price Administration.

The family will receive friends at Grace Episcopal Church in Sheffield on Friday, May 10, from noon until 1:00 p.m.  The funeral will follow at 1:00 p.m. at the church with Reverend Donald M. Smith officiating.  Burial will be at Sheffield Oakwood Cemetery.

Thank you to all who truly cared for the “Little Lady”.

Margaret requested no flowers but that donations be made to her favorite charities;  Safeplace, St. Jude’s Hospital, or the charity of your choice.