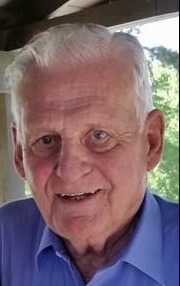 Dalton Erlon “Pud” Harrison passed away Saturday, June 11 at the age of 94. He was born in 1927 and raised in the Center Star community and is a WWII veteran having served in the U.S. Army in Japan. He returned from Japan in 1947 and married Billie Sue Phillips in 1950 and they would have celebrated 72 years of marriage in August. Pud worked on a produce truck for many years with Townsley Produce and Boston Christian Produce and then for a brief period with Guthrie Sausage. He hired on as a routeman with Pet Milk Company in Florence and eventually worked his way up to the manager of the company. He won numerous sales awards and trips until his retirement in 1982. Retirement served him well and for 35 years he ran trotlines, picked blackberries, fried hundreds of kettles of catfish and made the best blackberry cobblers known! He picked 10 gallons of blackberries in one day numerous times and at the age of 62 picked 135 gallons in one summer. The highlight of his running trotlines was the 76 lb. catfish he caught at the age of 76! He spent hundreds of hours visiting assisted living facilities, nursing homes and hospitals encouraging people and was a volunteer at ECM Hospital for 25 years. Having quit school to serve in the Army meant he never graduated from high school, however Brooks High School presented him with an honorary high school diploma in the 1990’s. He was an avid supporter of the Brooks Lions and an active member of the Killen Lions Club for over 25 years. Most importantly was his Christianity, he was baptized in the early 1950’s and worshipped at Pine Street Church of Christ, Darby Drive and then in 1971 went to Wood Avenue where he and Billie have been members for 51 years. He taught Bible classes, served as a deacon and elder and will forever be known as the “Gum Man” at Wood Avenue, numerous children would come to him for gum before services. Pud was raised very poor in the depression years but his heart was big and he practiced the Golden Rule all his life. He would give you his last dollar if you were in need and never complained about being raised in such difficult conditions.

Preceding him in death were brothers Roy, Leon, Jesse and sisters Bernadean and Bessie. The family would like to thank Hospice of North Alabama and in particular Annette, Michelle and Kevin McDaniel.

The visitation and funeral will be Monday, June13 at Williams Funeral Home with the visitation from 12-2:00 and the funeral to follow at 2:00. Rodney Plunket and Steve Harrison will conduct the service with burial and military honors to follow at Tri-Cities Memorial Gardens.