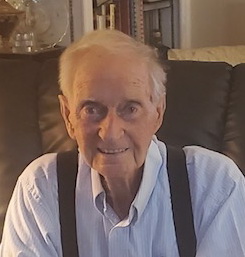 William Oscar “W.O” Springer, Jr. of Florence, born on January 14, 1935 and passed away on July 29, 2022 at the age of 87. Visitation will be Friday, August 5th, from 5:00 pm until 8:00 pm at Williams Funeral Home. The service will be Saturday, August 6th at 1:00 pm in the funeral home chapel with Brother Tim Grigsby officiating.   Burial will be at Restview Cemetery in Loretto, Tennessee. Pallbearers will be nephews, honorary pallbearers will be his co-workers at Shoals Provision and his golfing buddies.

W.O. was a 1954 graduate of Rogers High School where he was a member of the school’s first basketball and baseball teams.  W.O. was a U.S. Army Veteran having served for his country from 1958 through 1960 and the Army Reserves for 4 years. He was employed with Stylon Ceramic Tile from 1954 – 1968 where he was certified in Time and Motion Studies from the University of Ohio.  He obtained an Associates Degree in Business and began a 52 year career in sales.  He was currently employed by Shoals Provision where he had worked for the last 32 years.   His love of sports continued throughout his life, playing baseball, softball, bowling, and his favorite sport, golf where he made many lifelong friends and passed on the love for the sport to his grandson. He will be loved and missed not only by his family but his many friends he made in his lifetime.