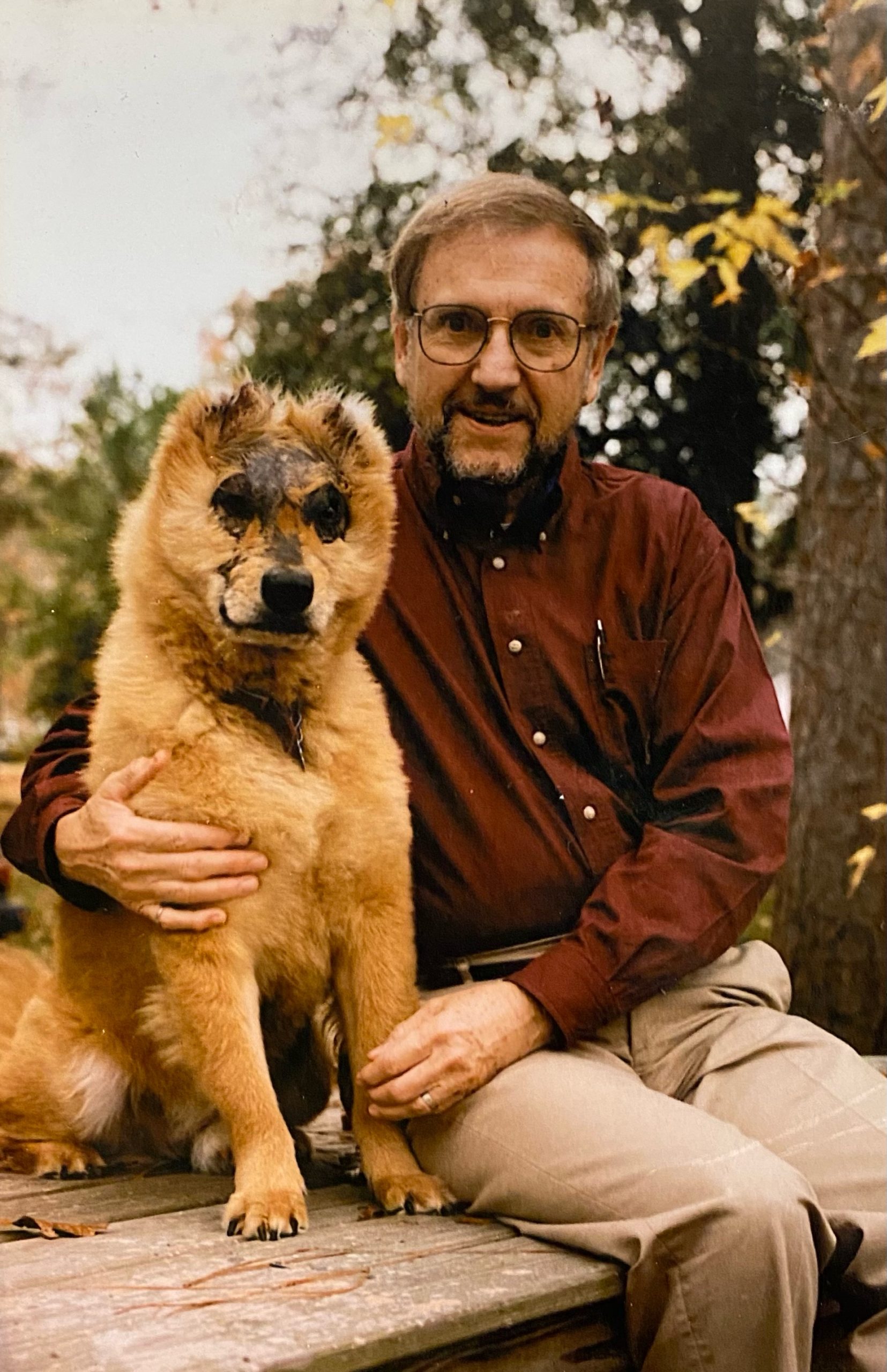 During the 86+ years of his life he was blessed and led a productive life as a talented artist,  gifted writer, beloved professor, lover of travel, music and theater, an animal rescuer and advocate (profoundly demonstrated in his love of the puppy Gucci), a loving son, brother, Uncle and Christian.

Born the 9th day of December in 1934 he left those earthly bonds on the 9th day of April 2021.  Eighty-six years, four months and 5 days.. Second born child of Charlie and Bert James after Doris followed by Janice and then Dan.

His first teaching assignment was Cherokee Vocational High School then Sheffield High School while living on Hawk Pride mountain in Colbert county.  It was there that his former student, Earl McClure joined his household and remained a friend for life.  He moved to Auburn in 1969 and taught at the University and housed several students during his tenure there. He then moved to his beloved second hometown of Mobile in 1974 where he served as Assistant Professor at Spring Hill College for two years. He briefly taught at Williamson High School and then served as Assistant Principal (1976-1980).  In 1980,  he started a 12 year stint teaching at Vigor High School before retiring from public teaching.  In 1992, he returned to Spring Hill as adjunct professor. During this time, he also held teaching positions at Enterprise-Ozark Community College, Faulkner, and Alabama Aviation College. In these positions he directed plays and films, sponsored chess club, swim team, debate team, drama club, choir, as well as teaching a wide variety of subjects. Once again at each of the houses in Mobile, he offered room and shelter to various students in their time of need.

In January of 1957, Doug enlisted into the US Navy and was trained as a Hospital Corpsman.  When he was Released From Active Duty, he continued to serve in the Navy Reserve and supported Navy Medicine ashore, afloat, on foreign shores and often was assigned to support US Marine Corps in operations as a Field Medical Service Technician in all of the extremes of heat, cold and altitude.  During his Navy career he advanced to and retired as an HMC, Chief Hospital Corpsman.  During his 34 year career he was stationed at Naval Hospitals in Beaufort, South Carolina, Pensacola, Florida and New Orleans, Louisiana.  He often supported the summer surge at the Naval War College in New Port, Rhode Island.  Several of the shipmates he served with would always gather to meet him whenever he and Beth Anne would go to Mobile for a visit.  The support of those life-long contacts meant a great deal to Doug.

On breaks from school he loved to travel.  Europe was his favorite and during one summer of travel he stayed with Jim and Jackie Noles in Germany.  He made many trips to France, Italy, Austria and Belgium.  In 1995, he and Beth Anne made a two week trip through Greece, Turkey and the Greek islands.  Paris was his favorite and it was there that he and Beth Anne made two trips. He studied and spoke the languages of German and French. His gift of accommodation and inclusion was evident from even a brief conversation.  His intellect was apparent but not in a boastful manner, it was more to enhance his audience.  He loved many genres of music and we’ve heard several of his favorites today.

A consummate chef, he loved to cook for friends and family,  He would host dinners in his home and serve elaborate four-course meals (many of his own creation) with appropriate wine parings with each course. On his trips home to Florence from Mobile, he would bring all the ingredients and new recipes and cook for the whole family. He would also often cook for his colleagues at Spring Hill.  The last dish was of a pot of gumbo that he took in February of 2013.

Of course, a whole chapter of his life was devoted to the puppy he rescued in 1994.  His devotion and passion to that puppy, Gucci and his recovery was recorded and followed by the press in Mobile and then around the world.  Through his tireless efforts with members of Alabama lawmakers, laws were enacted that punished abusers of animals.  This law was known as the Gucci Law.  Gucci traveled with Doug to adoption events, dog parades and school presentations.  Doug later wrote a book, Gucci – A Puppy’s Tale.  Gucci and Doug even appeared on the Maury Povich show filmed in New York.  They traveled throughout the Southeast to book signings at Books A Million with Gucci appearing as Guest of Honor. During these travels Gucci was referred to as a Rock Star and Doug was his driver.  In 2012, film producer Gorman Bechard found this story and made a feature length documentary about Doug’s involvement with Gucci and the evolution of the Gucci Law.

He loved antiques, old MG cars and restoring old houses.  He restored three in Mobile.  His latest on Lancaster Road is now occupied by Beth Anne’s daughter, Rachel.  It is located just a few blocks from his office on the beautiful campus of Spring Hill.  Rachel brought clippings from the Avenue of the Oaks and a Mobile azalea.  Those clippings are also with Doug’s remains.

In February of 2013 at the age of 78, Doug was still teaching on three college campuses.  After a day of classes at Spring Hill he was preparing to drive to Alabama Aviation college when he suffered an ischemic stroke. As a cruel fate, the stroke left him with expressive aphasia and weakness on his right side.  He realized that he couldn’t live alone any longer and reluctantly agreed to move back to Florence.  He and Beth Anne chose the assisted living facility that is now known as Renaissance.  While residing there he continued to work on his fifth book about the Mormon religion.  He had the assistance of several students from UNA that aided him in research and keyboarding.  A special young man, Ian Romine, was his last assistant  for the last four years and his love and devotion to Doug was remarkable. Doug also returned to painting as therapy and to occupy his time.  His paintings filled the walls of his apartment and his works were admired by many.

During his years in Florence he enjoyed being reacquainted with old classmates, former students and many family friends. Betty Champion, Ian Sanford, Jane Wilson,  Jim Noles and his mother Grace and Sonny Anderson were some that paid visits to reacquaint with Doug during these last 8 years. Special mention of Dr. Bob Mann who cared for Doug and only through his dedicated medical care did Doug get through some tough physical ailments.

Thank you to the many people who patiently cared for and assisted him.

The staff at Renaissance especially to Mary Donna, Amy, Sissy, Sandy and Terri.  To John and Shannon from Kindred Home Health. To the staff of Kindred Hospice, particularly Breann and Renea.  To the Visiting Angel, Stephanie, who only knew him a little while, but loved and cared for him til his last breath.

Left to cherish the memory of his beautiful life are sisters,

Doris Grimes and Jan Kennedy and her husband BJ

His brother, Dan and his wife Caroline.